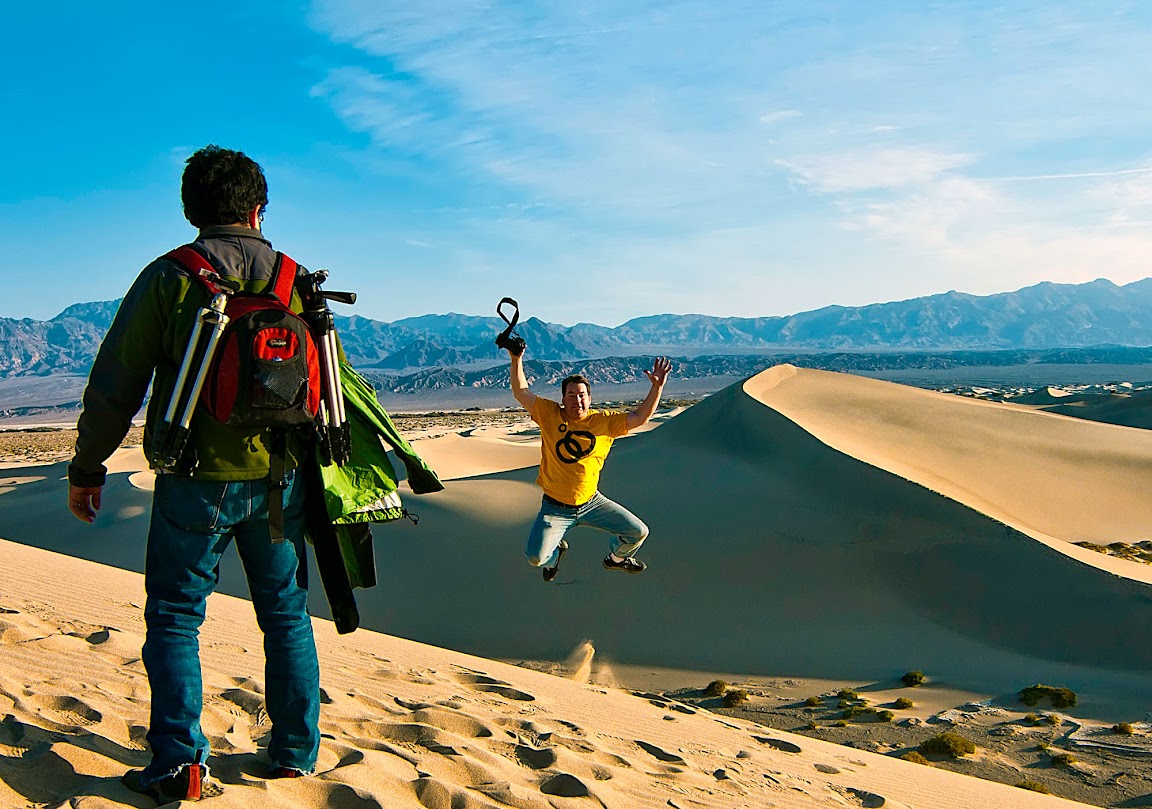 Photo of me jumping on Mesquite Dunes by +Mark Esguerra.

What a GREAT weekend I just got back from!

There are so many highlights to this weekend that I don’t even know where to begin — so many talented photographers and good friends were on this trip. Many of us stayed at the Atomic Inn Motel (which was hard to find because the HUGE neon sign outside said Phoenix Inn, but the staff was super nice). Food was somewhat limited in Beatty, although a few of us did brave the smoke filled casino to get to the 24 hour Denny’s and get our fix of steak and eggs.

Some people got in as early as Thursday, but I came in on Friday. Our first stop was the Ghost Town of Rhyolite, NV where we got a great sunset and also did some fantastic night shooting and light painting into the evening. We took a brief break to take over the back room of the Sourdough Saloon for drinks and adult beverages, went out and did some more light painting, and then came back yet again to the Sourdough Saloon where I think we frightened some of the locals. 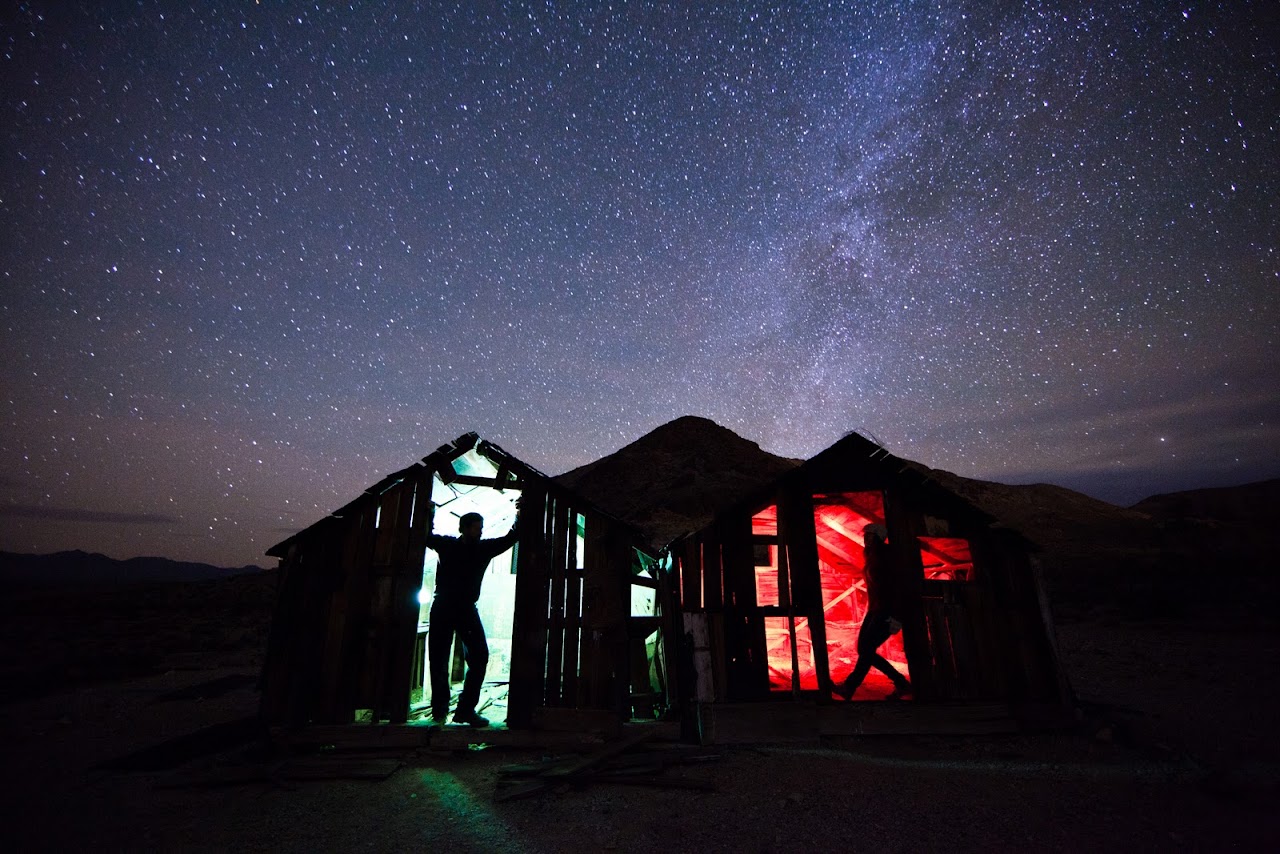 If you’ve never shot Rhyolite at night, you definitely want to put this one on your list.

It was fun for me to finally get to try out the Jarvie Window (this flash ring thing that +Scott Jarvie uses for making really awesome wide angle portraits of people). After some good drinks and fun bar portraits most of us headed off to bed to get ready for our big sunrise shoot out at the dunes the next morning.

+Bo Lorentzen had also made up the *coolest* +1 Death Valley 2011 Google pins and he handed those out as well. Thanks again Bo for having those made up!

The Mesquite Dunes in Death Valley are really something. Saturday morning some of us got up at the brisk hour of 4am to meet up for our 4-5am departure time to make it out to the dunes by sunrise. Still others (+Amy Heiden, +Scott Jarvie and +Sly Vegas) got up at 3am to make it out there even earlier.

Shooting the dunes is tricky, but they are beautiful. I still think I’ve got about 5 hours of work left on one of my photos from that morning’s shoot cloning the thousands of little footprints out of the sand. We also had a good time just playing around on the dunes too. +Lotus Carroll took the challenge to roll down the Dunes and not to be outdone +Matt Roe decided to jump off of them gonzo style. +Mark Esguerra got that great photo of me doing my own jumping up above. 🙂

We thought we lost Sly in the dunes later that morning and had a good time at breakfast coming up with scenarios on how Sly had disappeared to have his Carlos Castaneda/Jim Morrison sort of dune experience. In actuality Sly had really just snuck off back to the motel with +Cliff Blaise. 🙂

Google I Love You So Much I’d +1 That, Death Valley Edition.

Breakfast was a great but greasy all you can eat thing. At breakfast we thanked everybody for making the trip and introduced the folks who had made the trip from Google — +Dave Cohen, +Brian Rose, +Vincent Mo, +Tony Paine, +Ricardo Lagos, Tim St. Clair, Vega Paithankar, Gerard Sanz, Agata Krzysztofik, and +Priscila Queiroz. (I’m sure I probably left somebody from Google out, if so let me know so I can add them).

Also at breakfast I got to finally get my +Ricardo Liberato Liber Angry Guy portrait. 🙂

After the Dunes and breakfast in Stovepipe Wells, we made our way to the grandaddy of them all in Death Valley, The racetrack. We stopped off for a brief nap at Scotty’s Castle on the way where +Luc Asbury told me the story about his first ever trip to Death Valley which was preceded by a dream that he’d had about lighting up the grandstand at the Racetrack. We also made a stop at Ubehebe Crater.

The Racetrack is a mysterious almost spiritual place. You have to drive in on a somewhat treacherous dirt/rock road for about an hour and half. I had rented a 4×4 and still couldn’t go much more than about 70 mph (joking, really the pace is about 20 miles per hour or slower on this road). We saw a Ford Expedition that had a flat tire on the road on the way in — bummer. +Matt Roe told me that it’s about $6,000 to get a tow out of there if you get stuck.

Out at the racetrack (a giant hard mud playa) are some amazing moving rocks that are referred to as “Sailing Stones.” These large stones in some cases have travelled 100 feet or more and have long tracks cut into the hardened mud. They really are amazing to see. Apparently there is some sort of a scientific explanation for them, but I liked fantasizing in my own head about supernatural or spiritual explanations — because that’s how the place feels. We were able to do some great night shooting out on the Racetrack and +Michael Bonocore and +John Getchel brought some steel wool to do some awesome night fire photographs.

Unfortunately +Ricardo Lagos, +Matt Roe, +Lotus Carroll and myself stopped at THE WRONG PARKING LOT!!! and missed some of the fire fun — instead we wandered aimlessly around the middle of the Playa but got some great shots out of it. 🙁 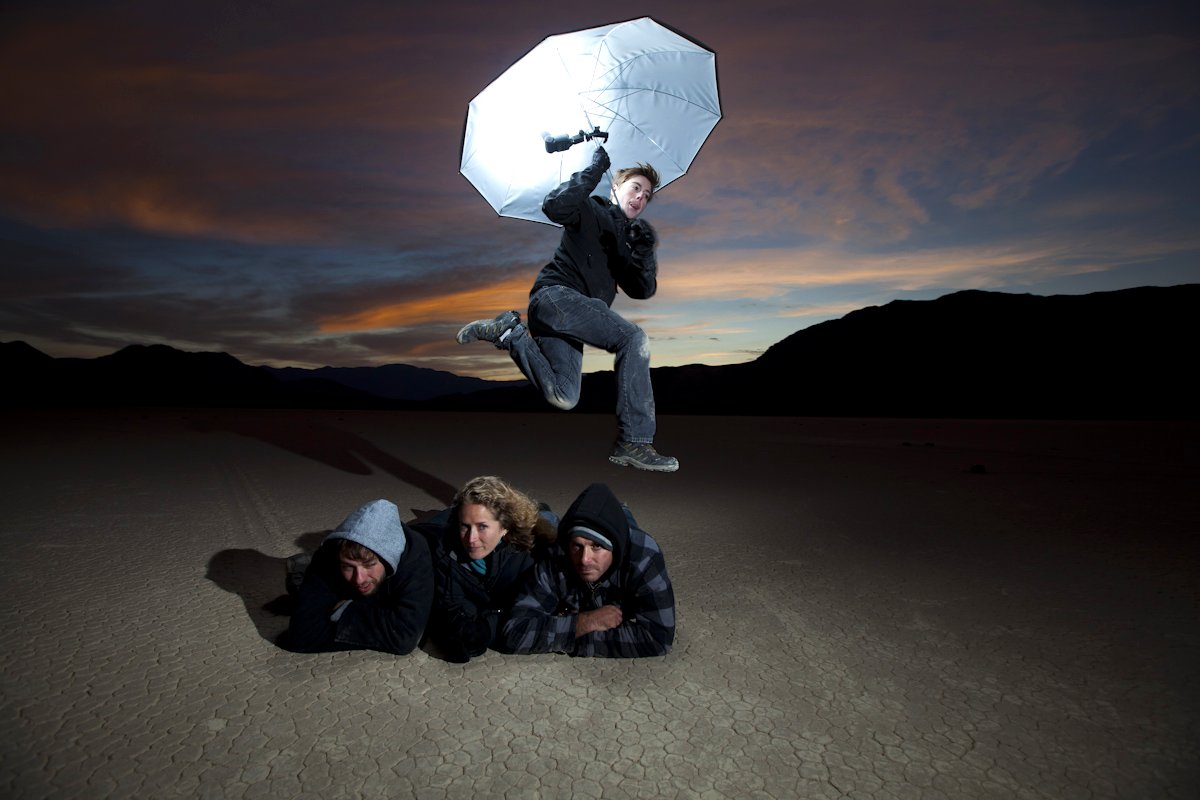 Many people stayed out and slept on the Playa that night. We did end up making it out alive though, only to have to get up for a 4am departure time for Zabriskie Point the next morning.

After driving about halfway to Zabriskie Point behind +Elizabeth Hahn (who thankfully drives fast!) I unfortunately realized that I’d made the boneheaded mistake of leaving my camera back in my motel room. Fortunately +Karen Hutton was right behind us and I was able to drop +Ricardo Lagos into her car and go back and get my camera.

Although I didn’t make it to Zabriskie point by sunrise, I did get to almost hit four donkeys in the road (hey, we were warned with a Donkey Crossing sign) and still got a wonderful sunrise shot of the salt flats. Stefan Bäurle (and a lot of others) got a pretty kick ass shot though!

After breakfast on Sunday people sort of broke up to do different things. We were able to get some amazing abandoned buildings and cars at the old Cashier Mill and Aguereberry Mining Camp along with some great rock shots on the Canyon into that mine. We also made a sunset/night excursion into Badwater, but we were robbed of our sunset by a heavy layer of overcast fog and a bit of rain. And I finally got the giant “Cowboy Steak” that I wanted back at Furnace Creek and got to watch +Karen Hutton talk for about 5 minutes with our waiter about show tunes. 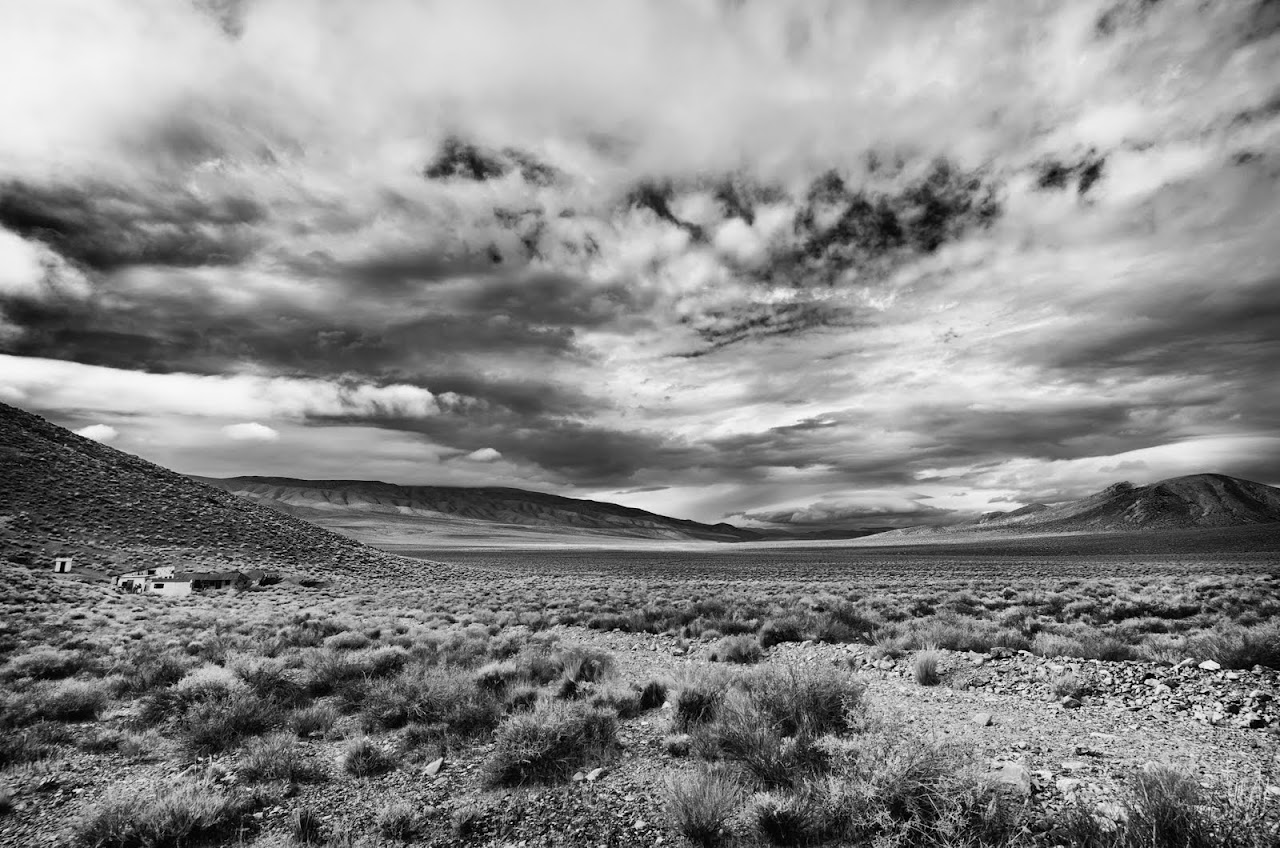 Some people stuck around for still another Monday Morning sunrise (you’ve got endurance +Cynthia Pyun!) and I heard +Luc Asbury took people the long way home on the drive back to the Bay Area on Monday.

I’m sorry I didn’t get to name each and every person on the trip in this long blog post. I met so many more great photographers on this trip and was really impressed with everyone who made it out for the weekend. It was truly one of my best weekends ever and my only regret is that I didn’t get to spend more one on one time shooting with even more people.

I don’t know about those of you who went on the trip but I’m thinking we ought to make this an annual event and head back there again next year at this time. Death Valley is so rich and there is still so much that we didn’t get to shoot — I feel like we barely scratched the surface and know that as great as the shots that we got this trip are that we should all think about having just as good a time again next year.

Thanks again to Google for the great turnout and for supporting our event and to every photographer who made the great weekend out there. I had a total blast and I hope you did too.

If you’d like to add some of the great photographers on this trip to your Google+ account, you can find a lot of them doing a search on Google+ for the hashtag #DV2011.