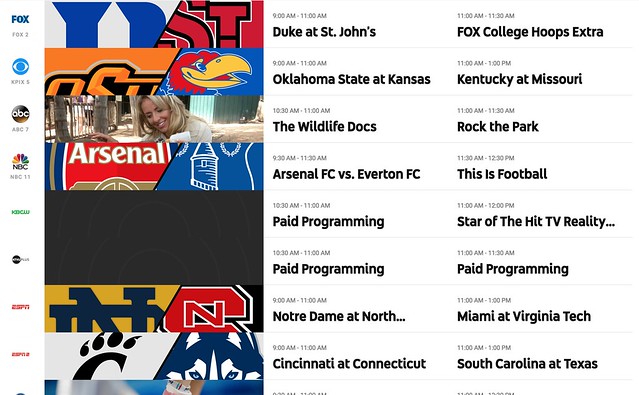 I’m currently on day 3 of my 7-day free trial with YouTube TV and I’m very torn about what to do and if I should continue it or not. I think that the only way to justify the $35/month charge is if I actually use it to cut the cord with Comcast for my TV content.

1. I *LOVE* that YouTube TV is now available on Apple TV. This is my biggest beef with Comcast. Because Comcast wants to sell you dumb cable boxes at $10/month on all your TVs, they make using Apple TV very difficult. Not only does Comcast not have a TV app for Apple TV (even though they falsely advertise watch TV anywhere at anytime) but they make you reauthenticate over and over again on all the individual content apps from people like CNN, CNBC, HBO, Showtime, etc. Having to reauthenticate over and over and over again is a huge pain. At present I’ve got 7 Apple TVs in my home and it would be nice to watch live tv on every one of them.

2. I could get rid of the ugly Comcast box that sits in my living room and I would also no longer need to toggle between inputs on that TV when using it. I would be able to get rid of one more remote control.

3. I would save money (I think?) I’m not so sure on this one just yet. I’m currently paying Comcast around $328/month for their triple play service. When I called them about cancelling TV they said they’d still charge me $65 for highspeed internet (up to 250MB) another $50 for unlimited usage, another $99 for the upgrade to 1 gig service (which has never really been at 1 gig, usually at 500MB to 800MB at best), and another $44 for phone with long distance (I’ve wanted to cancel the house phone for years but can’t sell this idea to the wife yet). So that’s $258/month before all the fees and extras, so $70 less — but once you add in all those miscelaneous fees and Showtime and HBO, I might be pretty much already at where I’m at today in terms of cost. I need to get the fine tip pencil out and do the exact math, but I’m not sure the savings would be as much as I’d hope for. I wish Google Fiber or somebody else would offer service in my area (Oakland, CA) in order to compete with Comcast, but at present it seems that Comcast is the only high speed provider in my area. ATT Uverse offers service but at only 50MB that speed is too slow for me.

4. Skipping commercials with the app on AppleTV using YouTubeTV seems easier than skipping them with the Comcast remote.

5. I like the YouTube TV interface better than the Comcast interface. I like that I don’t have a bunch of stupid channels getting in my way in the guide. Comcast won’t let you hide channels in the guide and it’s always seemed dumb to me that I’m constantly having to navigate around shopping channels, foreign language channels, unsubscribed pay channels, etc, that I’ll never use. While I haven’t used the app on my phone or laptop much I suspect that Google’s nice clean interface is better there too.

6. I like that YouTubeTV offers me an unlimited DVR.

7. YouTubeTV has the Warriors which I’d want on my TV package here in the Bay Area.

8. Up to 6 people in my family can use it and with four kids our family has exactly 6.

1. The biggest con (and frankly probably a deal breaker for me) is that I’ve read that YouTube TV will replace your DVR’d shows after a few days with on demand versions that don’t let you skip commercials on that version. Other than live sports, CNBC and some live news, I simply refuse to watch commercials. If this is true and my DVR’d content only lasted a few days per show, this would unfortunately probably kill the deal for me. I haven’t confirmed this myself yet, but I’ve read this in other places and in comments on blogs about YouTube TV.

2. I think YouTube TV broadcasts in 720p. AppleTV now has 4k capability. I’m blown away at how good some of Netflix 4k content looks and sounds on my 4k TV. I’m not sure what Comcast broadcasts in but on some of the content it feels like the Comcast version still looks a little better than the YouTubeTV version.

3. While YouTube TV does have a pretty strong lineup (all the major networks, strong sports, AMC, FX, etc.) it is missing CNN. I’m a little bit of a cable news junkie and would worry only being able to watch Fox News each night might move me too far to the right. Of course since every single night these days over and over again CNN is just Trump/Russia on repeat, I might not miss it so much after all. 😉

There are some other minor channels like TNT, Spike, etc. that I could live without but which are nice to have from time to time. Comcast has way more networks (most that I never watch, but once in a blue moon I just might).

5. I think I like Comcast’s voice controls better. If I say “CNBC” into my Comcast remote it just smartly tunes the TV to CNBC. With the Apple TV it seems like even when in YouTube TV if I try and use Siri on the remote it doesn’t limit it to YouTube TV. And when I say CNBC into my Apple TV it launches the CNBC app which stupidly takes me to a menu page rather than to CNBC where I want to watch live. From the menu screen I then have to navigate to watch CNBC live.

Anyways, these are my initial thoughts. I’ll probably cancel YouTube TV before the 7-day trial ends unless someone else can convince me I shouldn’t. Appreciate anyone else’s thoughts on the new service vs. Comcast.

Update: I cancelled YouTube TV earlier this week. Unfortunately I did it on day 8 instead of day 7 of my free trial so I’m stuck with the service until March 8th and had to pay $35. Oh well, I should have paid better attention to my trial. Maybe someday if they give you a true DVR and not one that replaces your recordings with on demand that don’t allow you to fast forward adverts I’ll be back. 🙂